During the first week of December members of the CMPF team were dispatched across Europe to report, discuss and debate the current and future state of media freedom and pluralism.

While coordinator, Elda Brogi travelled to Lisbon to speak at the conference Media Pluralism in Europe and Portugal and Mario Viola de Azevedo Cunha spoke at The Role and Functions on Contemporary Journalism conference in Poznan, CMPF Director, Pier Luigi Parcu was joined by research associates Lisa Ginsborg and Iva Nenadic to stage a roundtable discussion at the European Parliament in Brussels, hosted by MEPs Barbara Spinelli and Curzio Maltese, on the future of media pluralism and the CMPF’s flagship project the Media Pluralism Monitor.

Following a welcome from Spinelli and Maltese, Parcu reviewed the current digital-related risks already covered by the Media Pluralism Monitor (MPM) and highlighted future plans to further explore digital risks in the MPM, including;

LSE professor Damian Tambini continued with the theme of thinking about the future by first recounting for us the history of media policy – with regards to transparency and concentration of ownership in the UK, Germany and the US following the second world war – to the present-day situation where, he says, a new and completely different media environment requires a new, wider definition of media pluralism with new structures of accountability. Tambini argued that, given the monumental changes to the media landscape brought about by digital intermediaries, media pluralism needs to be redefined, bearing in mind these new digital platforms.

CMPF researcher Lisa Ginsborg followed up from Parcu’s introduction adding that not only do we need to measure more in future MPMs but there needs to be more and better access to data in order to do so, for instance; a lack of comparative data on citizens’ news consumption, interferences going unreported, a lack of data on the market share of the top 4 content providers, and election campaign transparency in the digital sphere among other deficiencies in data availability. Ginsborg’s intervention ended calling for more engagement from a diversity of stakeholders in order to facilitate better access to this data. 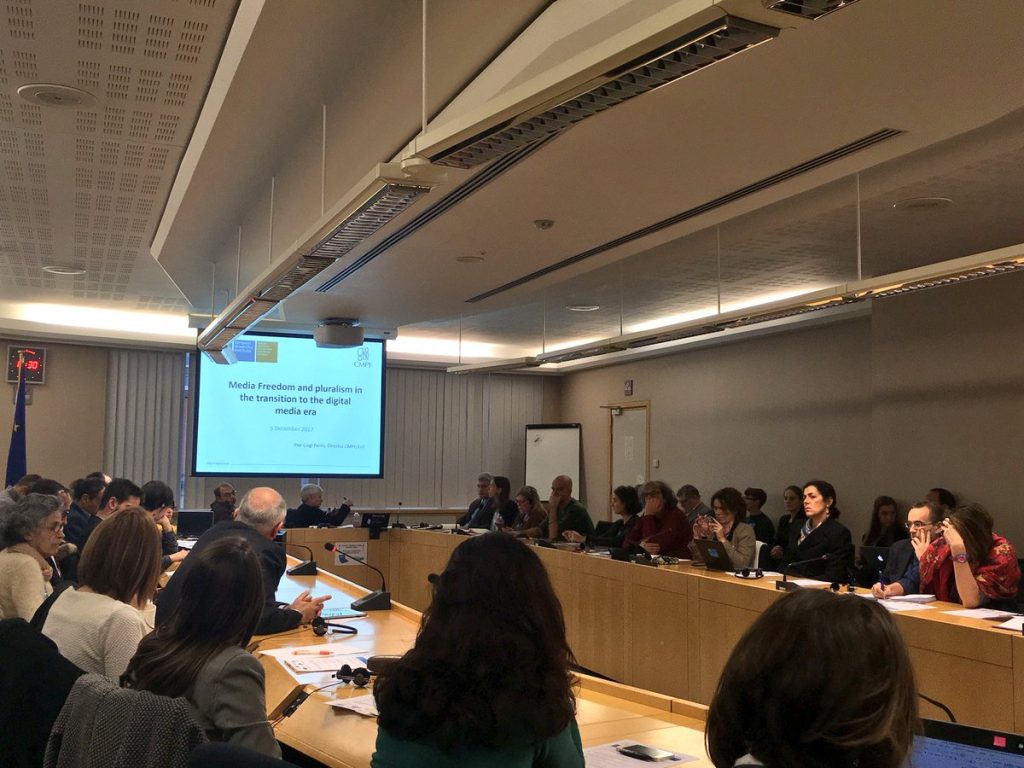 Renate Schroeder called for new public and private funding models to support independent journalism and journalists and reiterated the importance of journalism as a public service, saying

“The financing of independent and quality journalism is one of the central challenges for the safeguarding of our democracies, for the public right to know and for journalists and their economic and psychological survival.”

Iva Nenadic (CMPF) echoed the concerns of Schroeder, detailing further that the sources of journalism funding and sustainability are often sources of risks to media freedom and journalistic ethics, namely;

Further interventions from Giacomo Mazzone (EBU), Paolo Cesarini (Head of Unit Media Convergence and Social Media at DG CNCT), Jean Paul Marthoz (CLU), Tom Gibson (CPJ), Julie Majerczak (Reporters Without Borders), Paolo Celot (EAVI) and MEP Julie Ward spoke of the need for media literacy initiatives to counter mis- and disinformation. Cesarini, in particular, spoke of the current measures being taken by the European Commission such as the current public consultation on fake news and the open application of the fake news expert group as well as the meetings of the media literacy expert group.

See the conference agenda below. 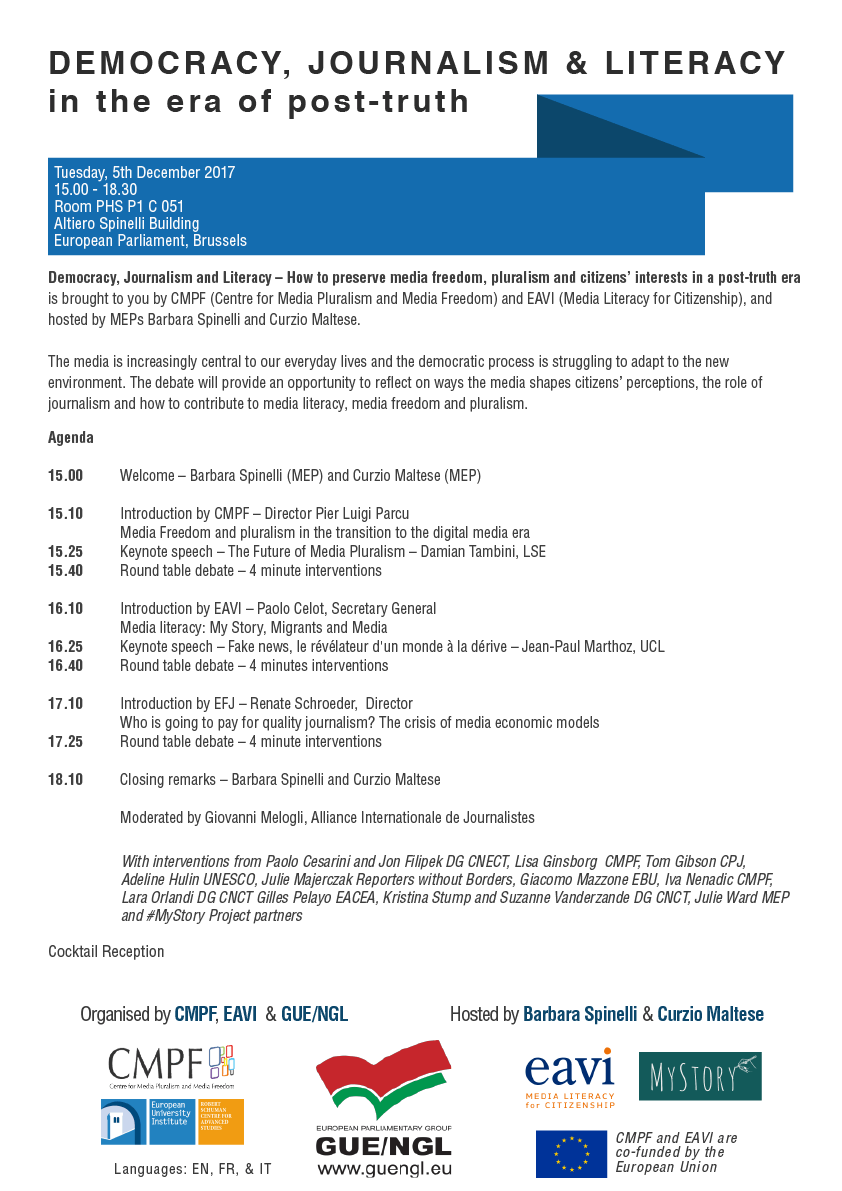 Announcement: This event has been postponed until 17 – 18 September   In March 2020 the CMPF will join the Florence School of Regulation Communications END_OF_DOCUMENT_TOKEN_TO_BE_REPLACED
View Calendar
Add
Scroll Up