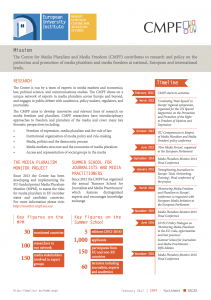 The Centre for Media Pluralism and Media Freedom (CMPF), established in 2011, and directed by Pier Luigi Parcu, aims to develop innovative and relevant lines of research on media freedom and pluralism in Europe and beyond and to provide knowledge support to the international, European and national policy and rulemaking processes. Therefore, the CMPF strives to enhance the awareness of the importance of freedom and pluralism of the media, to contribute to its protection and promotion and to develop new ideas among academics, policymakers, regulators, market stakeholders, journalists, and all other directly involved professionals who take part in the public debate.

Co-financed by the European Union, this initiative is a further step in the European Commission’s ongoing effort to improve the protection of media pluralism and media freedom in Europe and to establish what actions need to be taken at European or national levels to foster these objectives.

The CMPF pursues its mission carrying out four different activities: theoretical and applied research; debates; education and training activities and dissemination of results. These activities are structured through conferences and seminars held by high-profile academics recruited within and outside the EUI; the publication of working papers, policy studies and reports; and the organisation of training for journalists and media practitioners.

The scientific work of the Centre is focused on these main research areas:

Since 2013 the Centre has been developing and implementing the important project, Media Pluralism Monitor (MPM), to assess the risks for media pluralism in EU member states and candidate countries.

In order to preserve its full independence from specific political or commercial interests, the Centre for Media Pluralism and Media Freedom does not receive and accept funding from any national government or private companies.

The European Commission supports the EUI through the European Union budget