The Centre for Media Pluralism and Media Freedom (CMPF) has released the 2016 edition of the Media Pluralism Monitor, one the principal measures of the risks to media pluralism in Europe. The Monitor has examined 30 European countries in 2016 and the results show that none of these countries is free from risks.

“There is much room for improvement when it comes to protection from commercial and political interference in the media, and access to media for women and minorities“, says the director of the CMPF Pier Luigi Parcu. While most of the countries in general enjoy Basic regulatory safeguards for the media, some erosion to freedom of expression and protection to journalists can be analysed in one third of the countries. The worst scenario for basic protections is analysed in Turkey.  Only a few countries score low risk in the areas of Political independence, Market plurality and Social inclusiveness.

In 2016, the Monitor shows the following results across four key areas of media pluralism:

The area of Basic Protection includes the assessment on the fundamental elements of any plural and democratic society, namely the existence and effectiveness of the implementation of regulatory safeguards for freedom of expression and the right to information; the status of journalists in each country; the independence and effectiveness of the media authority; the universal reach of traditional media and access to the Internet. The results for the Basic Protection area show that 18 countries score low risk, 11 countries score medium risk and one country (Turkey) scores high risk. Most of the countries considered by the MPM2016 fulfil the basic conditions for a plural and democratic media environment. Nonetheless, the analysis confirms that most of the countries assessed in the MPM2016 present some shortcomings in the area of Basic Protection. 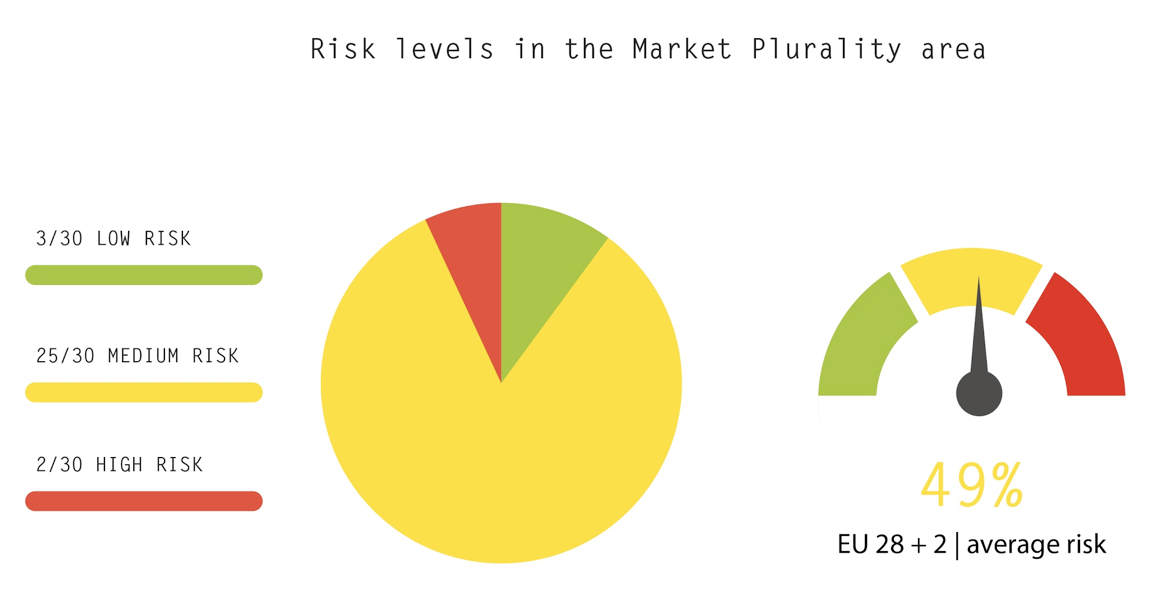 The Market Plurality area assesses risks to media pluralism that arise from the level of transparency and concentration of media ownership, commercial and owner influence over editorial content, and from the economic conditions in which media operate.

Based on the assessment conducted by the country teams, the vast majority of the countries under consideration score a medium risk. Two countries score high risk and only three countries score low risk. In general, Market Plurality indicators show the highest levels of risks amongst all the four areas of the Monitor. Media ownership concentration is the only indicator of the MPM2016 that performs overall in a high risk band, with no country scoring a low risk in this regard. Commercial and owner influence over editorial content is also a matter of concern for many EU countries and for the two EU candidates under consideration. 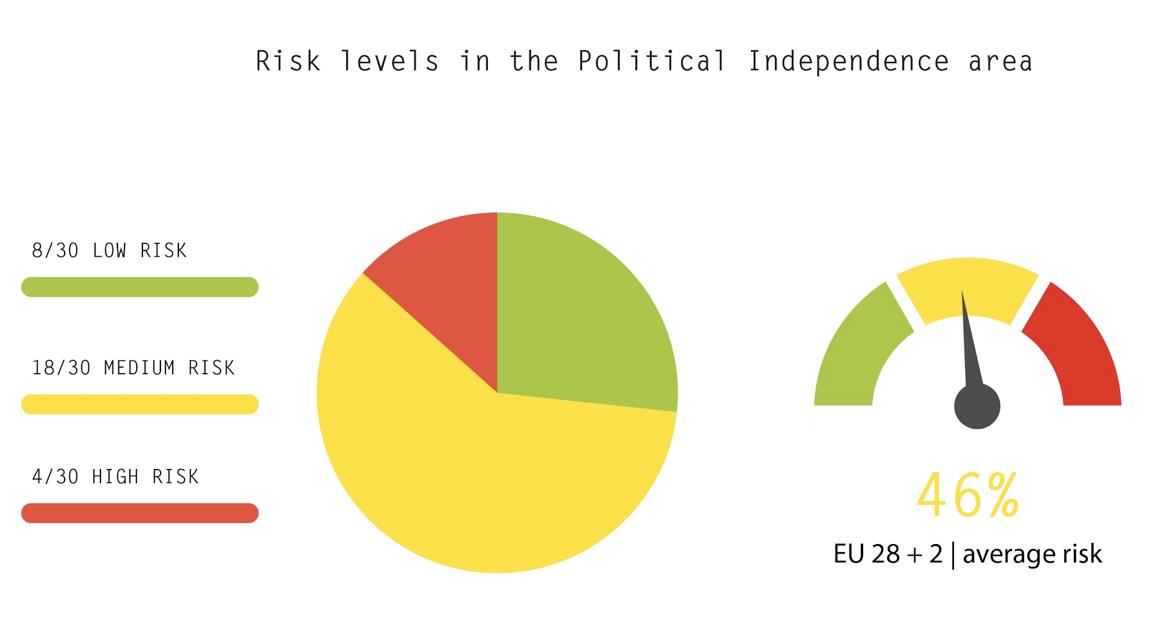 The Political Independence area is assessed using indicators that evaluate the extent of politicisation of the media system, media organizations, newsrooms, media reporting and the public service media. The comparative analysis of the risks reveals that a vast majority of the countries examined score a medium risk (18), eight are at low risk, and four are at high risk when it comes to political influences over different dimensions of their media operations. 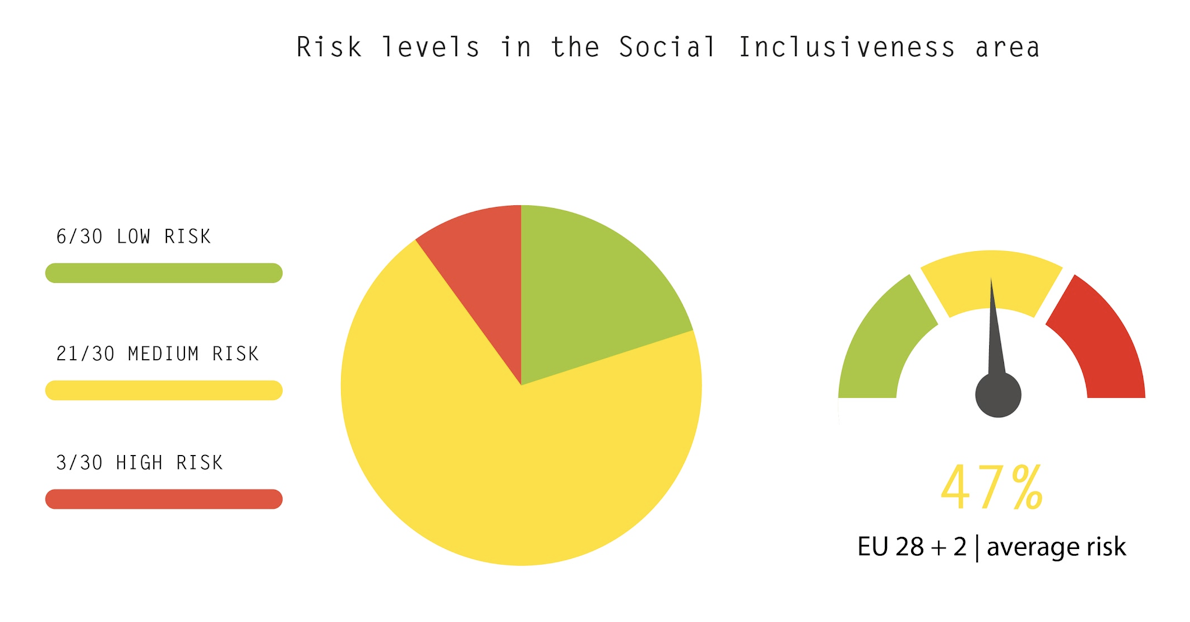 The Social Inclusiveness area examines media literacy and access to media by various social and cultural groups, such as minorities, local/regional communities, people with disabilities and women. Two thirds of the countries (21) are in the medium risk band. Three countries score high risk and six countries low risk. The indicator on access to media for people with disabilities shows the lowest risk but still ranks medium risk since support services for people with hearing and visual impairments are either non-existent or limited in the majority of countries. The highest risk scores are related to access to media for minorities and for women.

The Media Pluralism Monitor (MPM) is a tool that helps policymakers, researchers, and civil society to understand the threat to media pluralism in different media systems through research, analysis and the comparison of country data.

The MPM2016 report is available at https://monitor.cmpf.eui.eu along with a series of visualisations, and with the country reports.

In 2017 the CMPF will implement the Monitor in all 28 EU Member States and three candidate countries (Serbia, FYR Macedonia and Turkey). The 2016 Monitor will use both the tested indicators from 2016 and examine new aspects of media pluralism that have emerged during the last pilot implementations round. The results will be available by the end of 2017.

The MPM is a project co-funded by the EU. The data collection was carried out by experienced experts located in the countries of reference, and key indicators were peer reviewed by external experts.

The Centre for Media Pluralism and Media Freedom (CMPF) is a research and training centre that aims to develop innovative and relevant lines of research on media freedom and pluralism in Europe and beyond, and to provide knowledge support to the international, European and national policy and rulemaking processes. It is co-financed by the European Union.