On Friday 9 March, the CMPF presented the preliminary results of the Media Pluralism Monitor 2017 for Malta. Held at the University of Malta, in co-operation with the Faculty of Media and Knowledge Sciences, the event brought together journalists, researchers, lawyers, representatives of civil society and international organisations, in a lively discussion about vulnerabilities in the Maltese media environment and about wider challenges for freedom of expression and journalism in EU.

Following a welcome by  Professor Noellie Brockdorff, Dean of the Faculty of Media and Knowledge Sciences (University of Malta), CMPF’s Director Pier Luigi Parcu explained the academic history of the Media Pluralism Monitor (MPM), its methodology, and the key findings of the previous round of applications. The results of the MPM 2017 – covering  all EU Member States, FYR of Macedonia, Serbia and Turkey – will be released this spring. The data collection is completed and most countries are in the final phase of revising the country reports.
As highlighted by CMPF’s researcher, Iva Nenadic, in comparison to the MPM 2016, the MPM 2017 preliminary results for Malta exhibit an increased risk (from low to medium) in the area of Basic Protection. This is a strong reason for concern, as this area encompasses fundamental conditions needed to exercise journalism and freedom of expression. Most of the risk-increasing factors here relate to the assassination of journalist Daphne Caruana Galizia in October 2017, and to the deficiencies in the protection of journalists and whistleblowers. Malta is the only EU country that has such extensive media ownership by the political parties – two main political parties (governing Labour Party and opposition Nationalist Party) own national TV and radio channels, and newspapers. At the same time, editorial autonomy is not well protected, neither from political, nor from commercial influences; self-regulation is not effective and the only professional association is generally perceived as inefficient; there is no specialised trade union representing journalists and taking care of their working conditions; and there are no safeguards to prevent political influence over the appointments of the board members of the Broadcasting Authority and the public service media – PBS. Furthermore, Malta is one of few countries in Europe that to date have no policy on media literacy, and among the most problematic indicators are: access to media for minorities and for people with disabilities.
Anna Herold, Head of Unit of the Audiovisual & Media Policy Unit of the European Commission’s DG CONNECT, presented various activities carried out by the EC to support media pluralism and media freedom. Included in its competences: the revision of the Audiovisual Media Services Directive to respond to new realities, and the revision of the copyright rules to include the publishers’ (or ancillary) right, as well as horizontal legislation on whistleblower protection. As a part of its commitment to respect freedom and pluralism of media, the EC also co-funds relevant initiatives such as the Media Pluralism Monitor. She stated, “We are very proud of the MPM. It is our flagship project”. 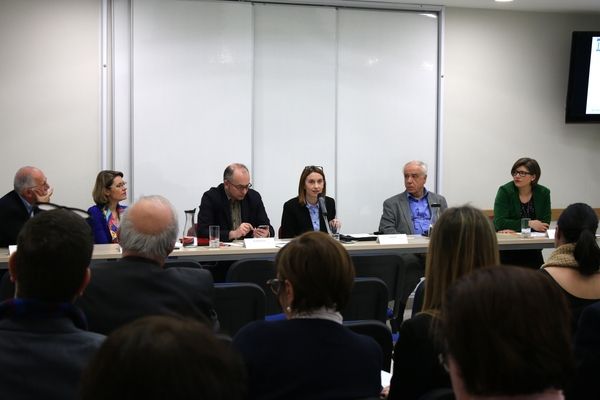 Ricardo Gutierrez, General Secretary of the European Federation of Journalists once again warned about precarious working conditions for journalists and growing risks for media freedom. “There cannot be media freedom if journalists don’t have good work conditions”, said Gutierrez, emphasising that: “Now, more than ever, we need strong journalists’ associations”. Speaking of the killings of two investigative journalists in the EU: Jan Kuciak in Slovakia and Daphne Caruana Galizia in Malta, Gutierrez called for stronger commitment in the fight against impunity, and safer legal conditions for journalists, their sources and whistleblowers. “There are still 34 defamation cases continuing against Caruana Galizia, posthumously”, he added.
Ramona Toma, Legal adviser for the Council of Europe Platform to Promote the Protection of Journalism and Safety of Journalists, said: “We could have celebrated the 3rd anniversary of the Platform, but if we look at the first page, we don’t see much reason to celebrate”. The first page displays the following: currently 124 journalists in detention, 14 cases of impunity for murder. Over the last three years the Platform has drawn attention to cases of threats to journalists and media freedom. The platform serves as a mechanism to put pressure on national authorities to find a solution.There are currently are two cases reported for Malta – both related to Daphne Caruana Galizia: her murder in October 2017, and the freezing of her bank accounts in February 2017 as a consequence of four libel suits that the Maltese Economic Minister and his consultant filed against her.
During the discussion, moderated by Rev. Dr. Joseph Borg, the Faculty of Media and Knowledge Sciences, Dr. Gorg Mallia (University of Malta) underlined another threat to media freedom in Malta: SLAPP (Strategic Lawsuits against Public Participation), and Corinne Vella highlighted once more that the murder of her sister, Caruana Galizia, was not a tragedy, but a crime. If there is no explanation for who ordered her killing, this case will have a lasting effect on freedom of expression.

See below the slides from Pier Luigi Parcu’s presentation: