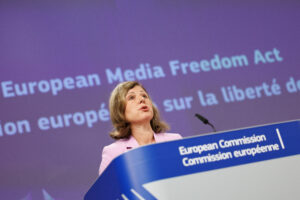 The Center for Media Pluralism and Media Freedom organises a high-level discussion on the recently proposed European Media Freedom Act. The workshop aims at investigating specific thematic points emerging from the new proposed measures, gathering input from representatives of regulatory authorities, the media industry, journalists, and other stakeholders. The event will take place both at the EUI premises and online.

On 16 September 2022, the European Commission published a draft proposal for a regulation on “establishing a common framework for media services in the internal market” (the European Media Freedom Act) and amending Directive 2010/13/EU.

The proposal, which is currently addressed by the European Parliament, includes measures against political interference, surveillance, independence and stable funding of PSM, transparency of media ownership and of the allocation of state advertising, as well as measures to protect the independence of editors and disclose conflict of interest. At the same time, the Act envisages measures on media concentration and creates a new Board for Media Services.

On the basis of the innovations introduced by the Act and the possible implications for the European media sphere, this high-level discussion will feature three thematic sessions, each focused on a specific topic emerging from the proposal and ultimately investigating the overarching question: will these novel and common measures be appropriate and sufficient to counter the risks for media pluralism and media freedom in the EU?